SALIO CONCEPT IS A COMPANY DEDICATED TO THE SALE AND MANUFACTURE. FOR DIFFERENT NEEDS AND SIZE OF WINDOWS AND DOORS, WE WILL RECOMMEND SUITABLE PRODUCTS TO MEET YOUR DIFFERENT REQUIREMENTS.

Our company is committed to ensuring quality and service in all our products and dealings with customers. Our products have since been widely distributed and used in Australia, China, Malaysia, Thailand and Indonesia. The company also has a well-established reputation for being innovative and in providing quality services in Singapore. With experiences in installing for homes, offices, hotels, chalets, hostels, hospitals and overseas projects (About Team and Customer), we are confident that we can provide you with the best product and service. We offer the most efficient and technically advanced insect screen available on the market. The screens are magnetically sealed against the window frames and are constructed of specially developed materials of the highest quality carrying an exclusive warranty. These quality materials will not rot or stain and are UV stabilized. Our products uses high quality material – US made Phifer material for the mesh, combined with Japan made magnetic strips and tensioning technologies for durable, lasting and attractive Screens that will complement any house or office.

About team and customer

Mr Toh constantly sought to improve the magnetic insect screen products to ensure they kept up to the newest technology in the market. The second generation had better magnetic strips, screen material. In addition, Mr Toh also designed new handles and parts to make the products more durable and easier for homeowners to use. These new designs were successfully patented in June 2006 with the Intellectual Property Office of Singapore.

These insect screen products have been widely installed in Singapore on private landed properties, condominiums and HDB houses. 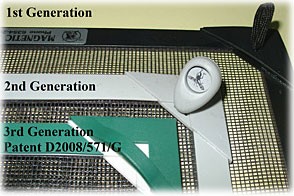